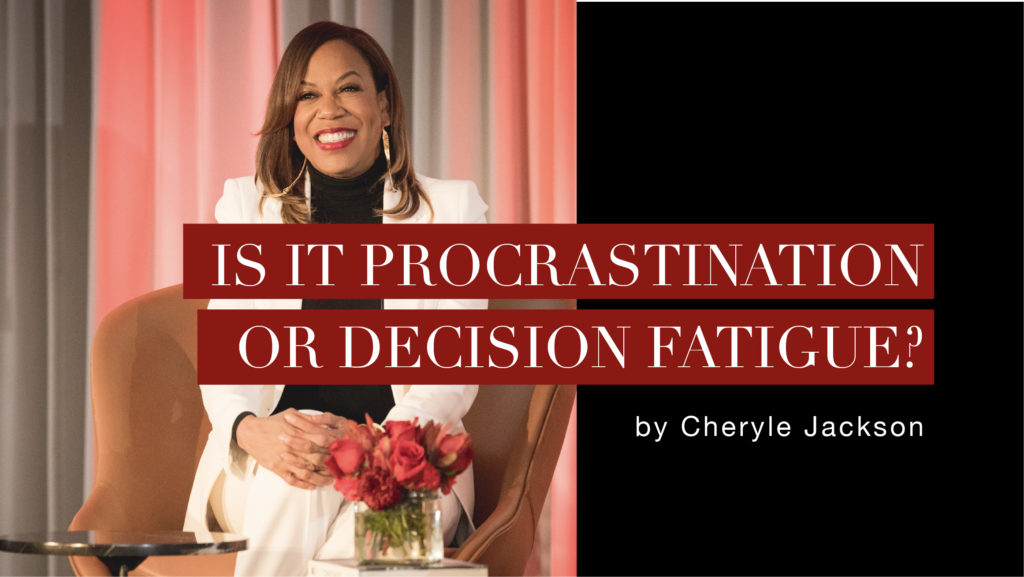 Procrastination is a fact of life. We all do it at some point. Sometimes we even procrastinate on things we know we want to do! But procrastination can also be a symptom of something more serious—decision fatigue. According to the American Medical Association, decision fatigue is “a state of mental overload that can impede a person’s ability to continue making decisions.”

Decision fatigue, on the other hand, is driven by overwhelm. You have too many decisions to make every day. The demands on your time and energy are overburdening you.

If it’s fear that’s causing your procrastination, know that most fear can be right-sized. I like to say that fear is like a shadow. It often looks much bigger than reality. I ask my coaching students to write a letter from their fear to themselves. It’s an important exercise. Getting fear out of your head and onto paper shrinks it down to size.

Become aware of when you are operating in fear mode. Some of us operate in fear mode so much that we no longer recognize it as abnormal. Pay attention to your emotional awareness. Get in the practice of checking in with yourself every day. We all react differently to fear, so learn how it manifests in your body. Does your heart race? Do you get headaches or indigestion? Naming your body’s response to fear helps you recognize it.

If it’s overwhelm that’s triggering your procrastination, then you need to reduce the number of decisions in your life. Automate any decisions that can be automated. Create routines. Many successful people automate their wardrobes. Instead of spending valuable time and energy each morning deciding what to wear, they’ve created a “uniform.” Think of Steve Jobs and his black turtlenecks. Figure out what looks good on you and that you feel comfortable in—and wear that every day.

Automate meals during the week. Automate your exercise. The more you freelance on everyday decisions, the more low-key stress you invite into your life.

Delegate, delegate, delegate. Between work and home, women are overburdened. Start assigning tasks to other people instead of just doing it all yourself. Don’t be afraid to negotiate around projects at work. You may not be able to avoid all of the worker bee projects, but can you negotiate the details—how those projects are prioritized, when the deadlines are, what kind of resources get devoted to them?